Before you start developing a web application with the help of Ruby on Rails framework, you need to have a list of software installed in your system. The list is given below –

We are assuming that you are already done with the installation of the web server and the required database system. Well, you can also use the server offered by the Ruby, which is, WEBrick Web Server. But generally, most of the web applications use other web servers such as Apache and Lighttpd, whenever the application is in production.

Ruby on Rails supports a number of database systems. All of these are listed below –

To set up your database to be used by Rails, you can refer to the corresponding Database System Setup manual.

In the below provided sections, we will be helping you to install Rails framework on two operating systems, which are –
* Windows, and
* Linux

Step 1: Check the version of Ruby
Begin by looking for a pre-installed Ruby on your system. For that, open the command prompt (or cmd) on your system and type in the following command –
ruby -v

If the respond of the Ruby is its installed version (such as version 2.2.2 or above) then type in another command, which is –
gem –version

In case, you are displayed with an error only then, you are required to go through the Install Ruby step. Otherwise, you can directly jump to the third step of this whole process.

Step 2: Installation of Ruby
This step is needed to be followed only when Ruby is not installed on your system. You need to start by installing a package from the website: https://rubyinstaller.org/. Under this web page, follow the provided download link. After that, run the resulting installer. This installer will be an .exe (executable) file, i.e., rubyinstaller-2.2.2.x.exe. The installation of this executable file will start in a single click. It is a light weight package which will carry RubyGems along with it. For more details, you can check for the Release Notes. 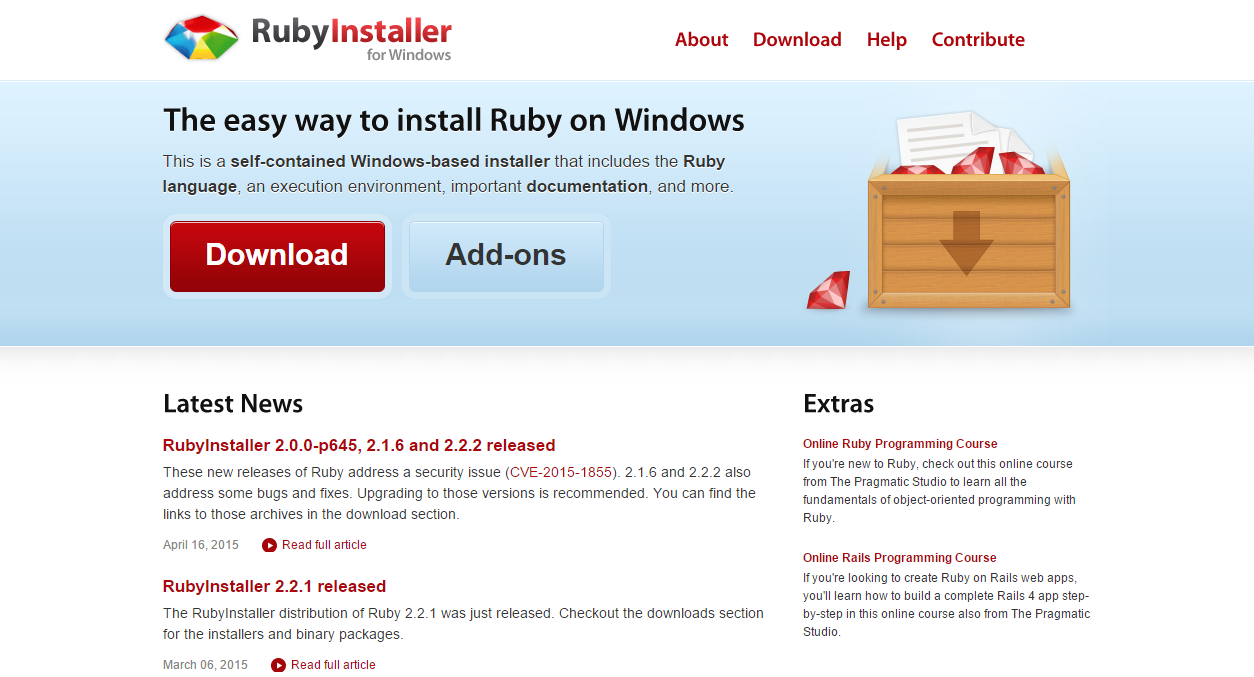 Step 3: Installation of Ruby on Rails Framework
Once you the RubyGems are loaded, now, you can install all of Ruby on Rails and its dependencies by typing in the following command on the command prompt –
C:\> gem install rails 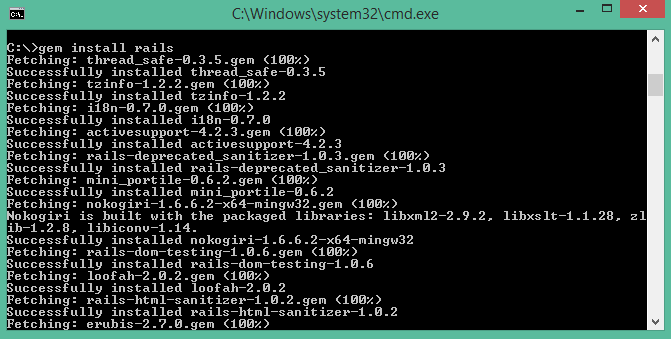 How to Install Ruby on Rails Framework on Linux?
For the installation of Ruby on Rails framework on Linux, follow the given steps. To install Rails on Linux, you will be making use of rbenv tool. Rbenv is actually a light weight Ruby Version Management Tool. This tool is capable of providing the easiest installation procedure which manages all the available versions of Ruby. It also provides a user friendly and concrete environment for the development of web applications on Rails.

The following steps will lead you to the installation of Ruby on Rails using rbenv.

Step 2: Installation of rbenv tool
Now, it’s time to install rbenv tool. With that, you are also required to set the appropriate environment variables. The following set of commands will help you to get the rbenv tool for the git repository.

Step 3: Installation of Ruby
It is important that you determine the version of Ruby you want to install. In here, we will be installing the Ruby version 2.2.3. Type in the following command on the command prompt which will help you to install Ruby –
tp> rbenv install -v 2.2.3

This another command will help you to set up the current installed Ruby version as the default one –
tp> rbenv global 2.2.3

For installing the supported dependencies, Ruby offers a keyword gem. In case, you want to skip the installation of documents of Ruby – gems then type in the following command on the command prompt of your system –
tp> echo “gem: –no-document” > ~/.gemrc

After this, install the Bundler gem. This gem will help you in managing the dependencies of your web application. The following command will install the bundler gem –
tp> gem install bundler

Step 4: Installation of Ruby on Rails
In this step, the below provided command will install the 4.2.4 version of Rails to get installed in your system –
tp> install rails -v 4.2.4

To check the Rails version, type in the following command –
tp> rails -v

Step 5: Installation of JavaScript Runtime
To install Node.js, you are required to use the yum repository. In here, we will be making use of EPEL yum repository for Node.js. The following command will help you to add the EPEL package to the yum repository –
tp> sudo yum -y install epel-release

The command will install the Node.js package by making use of the yum repository-
tp> sudo yum install nodejs
Step 6: Installation of database

There are a number of databases supported by Ruby on Rails. All of them are listed below –

Well, by default, Ruby on Rails uses sqlite3. This database installation step is completely optional. So, in case, if you already have any database installed then you can skip this step. Also, it is not mandatory that you need to install a database before you start the Ruby on Rails server. You can perform this step whenever required. In this tutorial, we will be using PostgreSQL database throughout. Now, install the PostgreSQL, type in the following command on the command prompt of your system –

Type in y to accept the prompted message on the terminal. After this, you are required to create a PostgreSQL database cluster by using the following command –
tp> sudo postgresql-setup initdb

How to Keep Ruby on Rails Updated?
We are assuming that you have followed the above mentioned steps only (or in particular, you have used RubyGems for the installation of Rails) then it would be a really easy task for you to keep Rails updated for all time. The following command will help you to do that –

Output –
Though the following screenshot is of Window’s command prompt. But this output will be the same for Linux’s terminal. 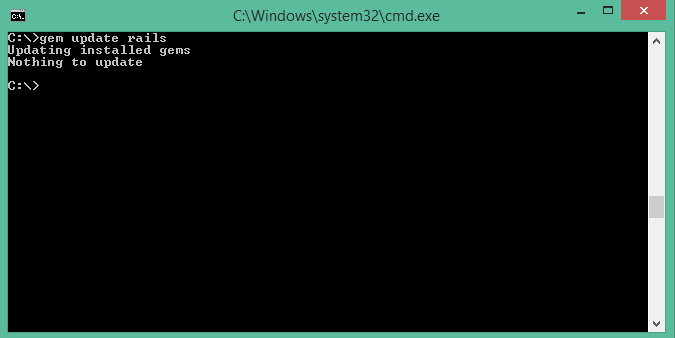 The command will help you to automatically update your Ruby on Rails installation. And this upgradation to work properly, you need to restart your system after the successful completion of the Rails upgradation.

Note – Keep in mind that you need to be connected to the internet during the processing of this command.

Installation Verification
You can always check if the installed Ruby on Rails is set up as per your requirements or not. The given command will help you to create a demo project –

Output –
The final output of the above command will appear as – 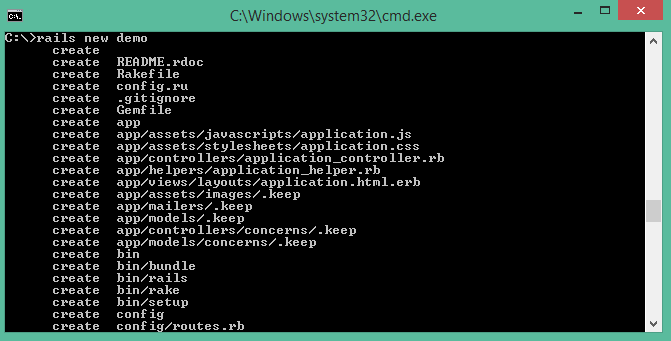 The above code will generate a demo Rails project that we will be discussing later in the module. Well, the above command will also be used to check whether the Rails environment is set up properly or not. After this, you are required to type in the following 2 commands to run WEBrick web server on your system.

The above command will generate an auto-code which will lead to the starting of the web server.

The next thing you have to do is open your web browser and type in the given URL: http://localhost:3000.

The display screen will prompt a message “Welcome abroad”. You can also get another message such as “Congratulations” indicating the successful installation and set up of the Rails on your system.